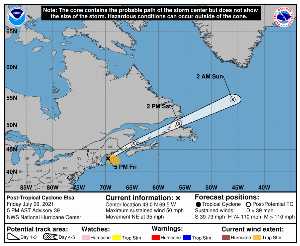 
WATCHES AND WARNINGS
——————–
CHANGES WITH THIS ADVISORY:

All remaining Tropical Storm Warnings for the northeastern U.S.
coast have been discontinued.

SUMMARY OF WATCHES AND WARNINGS IN EFFECT:


DISCUSSION AND OUTLOOK
———————-
At 500 PM AST (2100 UTC), the center of Post-Tropical Cyclone Elsa
was located near latitude 43.0 North, longitude 69.5 West. The
post-tropical cyclone is moving toward the northeast near 35 mph (56
km/h), and this general motion is expected to continue with an
increase in forward speed during the next couple of days. On the
forecast track, the center of Elsa will continue to move offshore
the northeastern United States coast through this evening. The
system is expected to move over Atlantic Canada by late tonight and
Saturday.

Surface observations during the past several hours indicate
that maximum sustained winds remain near 50 mph (85 km/h) with
higher gusts. Gradual weakening is forecast during the next couple
of days. Elsa is forecast to dissipate over the north Atlantic by
Sunday afternoon.

Tropical-storm-force winds extend outward up to 140 miles (220 km)
from the center.


HAZARDS AFFECTING LAND
———————-
Key messages for Elsa can be found in the Tropical Cyclone
Discussion under AWIPS header MIATCDAT5, WMO header WTNT45 KNHC and
on the web at
www.hurricanes.gov/graphics_at5.shtml?key_messages.

WIND: Gusty winds will continue across portions of the southern New
England coast during the next couple of hours. The post-tropical
cyclone is also expected to bring gusty winds to portions of
Atlantic Canada tonight and Saturday.

RAINFALL: Across coastal Maine…2 to 4 inches of rain with isolated
totals up to 6 inches are possible through this evening, which could
result in considerable flash and urban flooding. Isolated minor to
moderate river flooding is also expected.