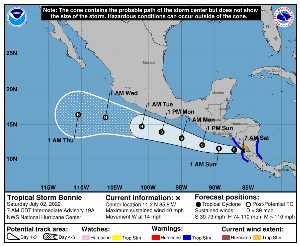 
WATCHES AND WARNINGS
——————–
CHANGES WITH THIS ADVISORY:

SUMMARY OF WATCHES AND WARNINGS IN EFFECT:

A Tropical Storm Warning means that tropical storm conditions are
expected somewhere within the warning area, in this case within
6 to 12 hours.

Interests along the Pacific coasts of El Salvador, Guatemala, and
southern Mexico should monitor the progress of Bonnie.

For storm information specific to your area, please monitor
products issued by your national meteorological service.


DISCUSSION AND OUTLOOK
———————-
At 700 AM CDT (1200 UTC), the center of Tropical Storm Bonnie was
located near latitude 11.2 North, longitude 85.8 West. Bonnie is
moving toward the west near 14 mph (22 km/h), and a continued
westward motion with a gradual decrease in forward speed is expected
later today. A west-northwestward motion is expected to begin
tonight or on Sunday and continue into Tuesday. On the forecast
track, Bonnie will emerge over the eastern Pacific Ocean in the
next couple of hours. Bonnie will then move offshore of but
parallel to the coasts of El Salvador, Guatemala, and southern
Mexico today through Tuesday.

Maximum sustained winds remain near 40 mph (65 km/h) with higher
gusts. Gradual strengthening is forecast after Bonnie emerges over
the eastern Pacific later this morning and should continue through
Tuesday.

Tropical-storm-force winds extend outward up to 70 miles (110 km)
from the center.

RAINFALL: Bonnie will continue to produce heavy rain across portions
of Nicaragua and Costa Rica through today. The following storm total
rainfall amounts are expected:

Nicaragua and Costa Rica: 4 to 8 inches, localized 12 inches. This
rainfall is expected to result in life-threatening flash flooding
and mudslides.

WIND: Tropical storm conditions are occurring in the Tropical
Storm Warning area along the Caribbean coasts of Nicaragua and
Costa Rica, and these will likely continue for several more hours.

STORM SURGE: Water levels are expected to subside along the
Caribbean coast of Nicaragua later this morning.