Subscription to the PRIVATE ZONE

All my social networks

Cyclones in the Atlantic

888 named systems have been recorded over the Atlantic basin (this also includes the Caribbean Sea and the Gulf of Mexico) since 1951. It is possible that a few were not very well assessed at the start of the period, before satellite imagery began. becomes relevant and ubiquitous.

Almost half (419) of these systems did not go beyond the tropical storm stage. The other 469 strengthened at the hurricane stage. 185 became major hurricanes (Cat. 3 and +) and 28 became category 5 hurricanes. 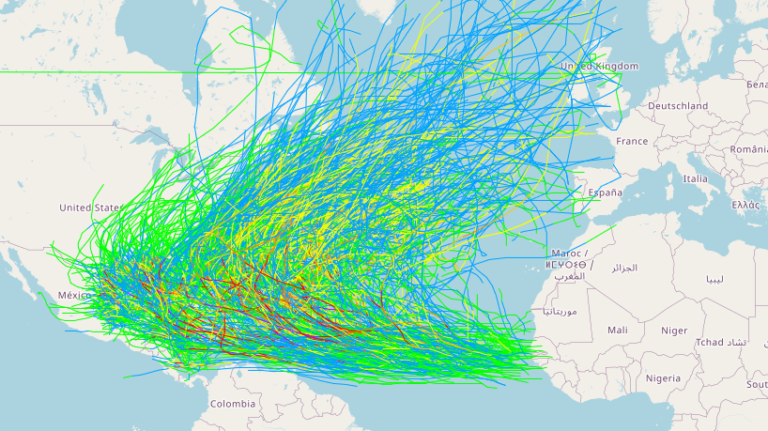 Distribution of cyclones by season

Number of cyclones and ACE intensity

We can see that, overall, ACE (Accumulated Cyclone Energy) is correlated with the number of systems in a season. There are however notable exceptions like the 2017 season which with 17 named cyclones was a little above average (13) is the 5th most intense season compared to the ACE index. In the other direction, the 2020 season which is the 1st in number of systems (26) has an ACE index of 180, i.e. less than the 9th in history since 1951.

The 10 most violent cyclones

The islands indicated as affected were not necessarily affected at the peak of the hurricane intensity. For Gilbert in 1988 for example, which is the second most intense cyclone in the Atlantic, it passed over Martinique in a tropical storm. To see the strongest cyclones to hit an island, go to cyclone statistics for the islands.

Click on the name of a cyclone or an island to view detailed information, you can sort the list by column or directly search for a name. On mobile you can drag the table horizontally with your finger.

to the PRIVATE ZONE

All my social media links

To understand a physical subject, it is absolutely necessary to have an idea of ​​orders of magnitude. It often avoids saying big nonsense!

Some figures on electricity in metropolitan France.

Orders of magnitude of the day:

We use cookies to offer you the best experience on our site.

You can find out more about the cookies we use or deactivate them in the settings.

This site has been developed for entertainment and understanding the weather in the tropics.

It should only be used NEVER for the safety of people or property.

Only information from your national meteorological service and your civil security should be used in case of proven risk!

Please confirm the deletion. There is no cancellation of change!

You can modify the cookie management parameters concerning you at any time by clicking on the tabs on the left.

This option must be enabled at all times so that we can save your preferences for your privacy options.

If you disable this cookie, we will not be able to save your preferences. This means that every time you visit this site, you will need to enable or disable cookies again.

This site uses Google Analytics to collect anonymous information such as the number of site visitors and the most popular pages. It also uses buttons linked to social networks.

Please enable Strictly Necessary Cookies first so that we can save your preferences!