Subscription to the PRIVATE ZONE

All my social networks

Cyclones in Saint-Martin and Saint-Barthelemy

No cyclone threatens the Northern Islands

The level of alertness is YELLOW

General information on Saint-Martin and Saint-Barthelemy

The 2 most northerly French islands of the West Indies, but also the smallest, form a meteorological territory called “the Northern Islands” given their proximity. Saint-Martin (SXM) has about 35.000 inhabitants in the French part and 4.000 more in the Dutch part for an area of ​​around 93 km². Saint-barthelemy for its part has a little over 9.000 inhabitants for an area of ​​around 21 km².

Their exposure to the risk of cyclones is high due to their location north of the West Indies but their very small size means that they are much less affected than Guadeloupe and almost as much as Martinique. However, we note that the systems which pass over Saint-Martin and Saint-Barthelemy are globally more violent than those of the other French islands of the Antilles.

Of the 16 cyclones whose center passed over or near Saint-Martin and / or Saint-Barthelemy, there were 5 tropical storms (or downgraded), 5 category 1 hurricanes, 1 major category 3 hurricane, 2 major hurricanes of category 4 and 1 major hurricane of category 5, the infamous Irma in 2017.

The most significant cyclones on Saint-Martin and Saint-Barth

It is undoubtedly about Irma in 2017. Passed over the Northern Islands in category 5 with sustained winds for 1 minute at 155 kts (287 km / h) and over 175 kts (more than 320 km / h) in a burst, it left indelible traces both in people's minds and in infrastructure. 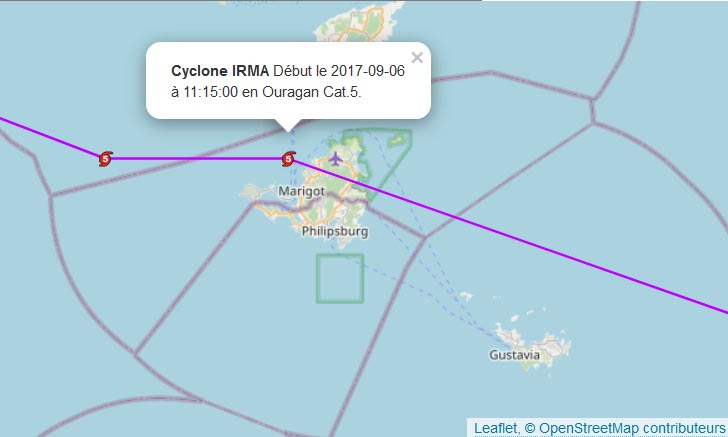 The human toll, subject to major controversy, reports 10 deaths, 7 missing and 247 injured for the French part and 2 deaths and 43 injured in the Dutch part. The material toll rises to the astronomical figure of 2 billion for 2 such small territories in terms of insurance. Irma and the 3rd most violent cyclone (ex-eaquo) in the Atlantic basin and has many grim records.

Unfortunately it is not the only cyclone to have hit Saint-Martin and Saint-Barthelemy very hard. Other hurricanes of sad memory have affected these territories in the past, including the unimaginable Lenny which will have crossed the whole Caribbean Sea in 1999 “against the grain” to stop on the Northern Islands in Cat.3 then 2, but also another devastating system, Luis in 1995 or more recently Gonzalo which was very badly anticipated by weather organizations in 2014.

As we can see, the Northern Islands do not receive more cyclones than the other French islands, but they are often very violent.

The northern islands have the record for the ACE (Accumulated Cyclone Energy) index in the Atlantic in terms of the number of inhabitants and km ².

With 16 cyclones passed on or near the archipelago, it is the French area least affected quantitatively. But it is at the same time the French territory that will have suffered the most material damage from the French Antilles, far ahead of Martinique and a little ahead of Guadeloupe, which nevertheless saw 10 more cyclones pass.

to the PRIVATE ZONE

All my social media links

Warning !
On Monday, November 28, 2022 at 16:55 p.m. legal, Watching in the Northern Islands increased to YELLOW level for waves-submersion.

See the details on: https://meteofrance.gp/fr/Watching/saint-martin-saint-barthelemy

Warning !
On Monday, November 28, 2022 at 16:53 p.m. legal, Watching in #Guadeloupe increased to YELLOW level for waves-submersion.

We use cookies to offer you the best experience on our site.

You can find out more about the cookies we use or deactivate them in the settings.

This site has been developed for entertainment and understanding the weather in the tropics.

It should only be used NEVER for the safety of people or property.

Only information from your national meteorological service and your civil security should be used in case of proven risk!

Please confirm the deletion. There is no cancellation of change!

You can modify the cookie management parameters concerning you at any time by clicking on the tabs on the left.

This option must be enabled at all times so that we can save your preferences for your privacy options.

If you disable this cookie, we will not be able to save your preferences. This means that every time you visit this site, you will need to enable or disable cookies again.

This site uses Google Analytics to collect anonymous information such as the number of site visitors and the most popular pages. It also uses buttons linked to social networks.

Please enable Strictly Necessary Cookies first so that we can save your preferences!